Under the Gunn – Episode 10

I’ve been too angry to post about last week’s UtG episode until today, waiting to see what’s being said around the interwebs, deciding if my anger was justified. I think it was. As you all know by now (unless you live under a rock somewhere, in which case, good for you!) Natalia was sent home last week.

The challenge was to work in three teams of two and collaborate on three designs – a mini collection for hip retailer Francescas. Natalia was paired up with Asha and Asha was not a bit happy about it. Sam and Blake moderated their comments about Natalia on this episode, but Asha made it very clear that she was pissed at being paired with Natalia and, IMHO, she went into this challenge with one goal in mind – get Natalia sent home – and she did a wonderful job. She was likely guessing that she could survive (another) Fashion Fail, while Natalia could not, and she was right.

The trouble started at Mood where Natalia’s fabric choices were flatly turned down by Asha and continued into the work room where Asha took over and dictated exactly what Natalia would be allowed to do. The result? A cute dress that had a lot of potential from Natalia – 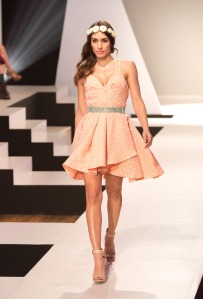 The front had some fit problems, but the back was great and totally Natalia – 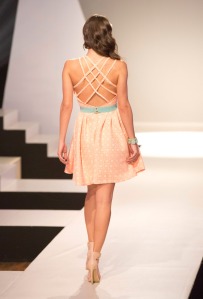 We got only a glimpse of the cute, well fitting shorts underneath Asha’s hideous dashiki and we got a lot of finger pointing by Asha on the runway, making sure the judges knew what Natalia was “responsible” for – way to look like a Team, eh?

The judges rightfully hated Asha’s awful outfits and asked which of them should go home, their team being in the bottom and one of them having to go.

Asha started to cry and plead with the judges, telling them how much she wanted to stay, when Natalia spoke up and said that she should be eliminated so that Asha would not blame her for getting sent home. And you know she would have moaned all over the interwebs!

Natalia showed amazing grace under pressure – you know she wanted to stay but felt bullied and disliked by the other designers and mentors. She looked so tired and just ready to go home. I love her parting line, “Under pressure, I’m a good person.” And she is.

Oscar and Shan were a wonderful team, working together seamlessly and turning out the winning looks, models of sewing perfection, as we expect from both Oscar and Shan –

The blazer and maxi dress are in Francesca’s shops and online for purchase and each of them won a $5000 prize. Well done, gentlemen! We here at SODesigns are still rooting for Team Nick – good luck tonight, Oscar!

Read Nick’s Inside Scoop on his blog.

Tim Gunn asserts that Natalia was not bullied by Asha or anyone else, but what I saw was most certainly bullying. Tim said that Natalia’s poor time management made everyone crazy, but we didn’t see any of that on ANY episode, except what Natalia said about herself. One has to wonder why there was so much time to show Isabella’s craziness (and there were many more designers to cover way back then) but nothing at all was shown about Natalia’s supposed “issues.” Doesn’t make for unbiased TV now, does it? Click the pic to read Tim’s full statement and enjoy the comments, too.

© Sofia Leo and Starting Over Designs 2014-2015. Unauthorized use and/or duplication of this material without express and written permission from this blog’s author and/or owner is strictly prohibited. Excerpts and links may be used, provided that full and clear credit is given to Sofia Leo and Starting Over Designs with appropriate and specific direction to the original content.